Exercise and Productivity: How Closely Are They Linked? 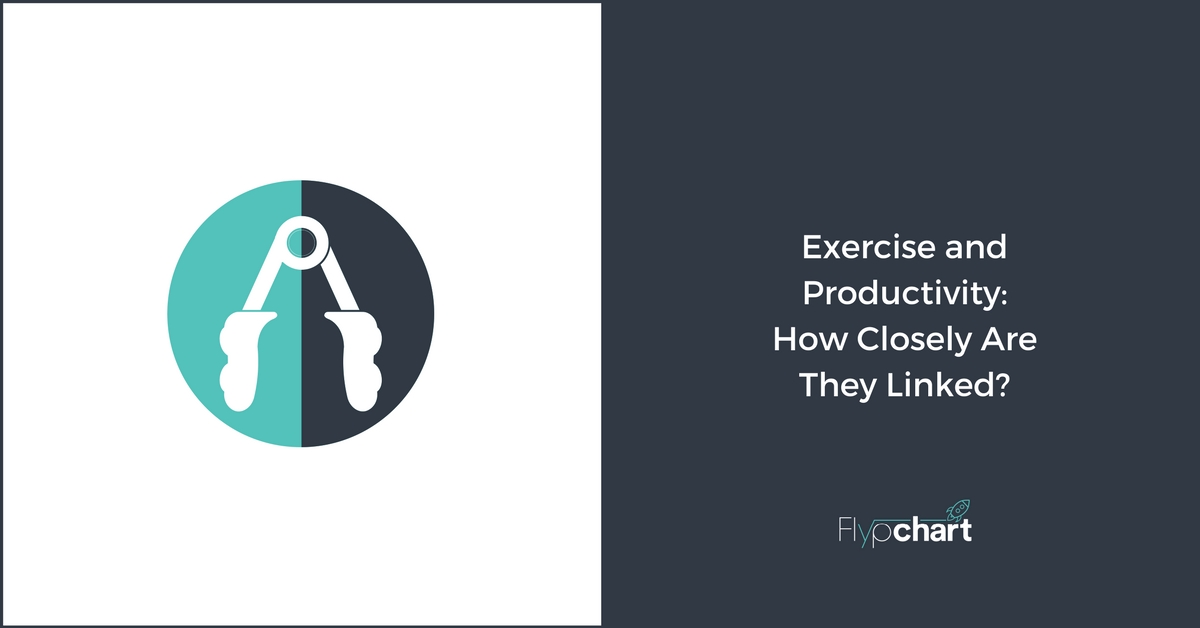 We all know them: the successful go-getters who wake up at 4:30AM every day to go running or slog it out at an F45 training session.

In fact, some of the most successful people in the business world swear by some kind of exercise regime.

But is there truly a link between exercise and productivity? Science says there’s a strong one. Exercise can boost your physical and mental wellbeing, making it easier to get things done.

Alternative theories posit that productivity is all about mindset, not exercise specifically.

Either way, regular exercise should be a part of your daily routine if you’re serious about improving cognitive function and resisting brain shrinkage. That’s right – your brain is a tissue, and like any other tissue in the body, it can deteriorate due to abuse, lack of use and ageing. Exercise can slow or even reverse this physical decay.

So what else can exercise do for you psychologically as well as physically? Well, the list is long, but here are six of the key benefits.

1. It makes your neurons nimble

I mentioned above that incorporating regular exercise into your routine can protect your brain from the inevitable physical decline that kicks in some time in our late twenties. In fact, I don’t mean to alarm you, but after that time the portion of our brains devoted to learning and memory loses approximately 1% per year in total volume.

Yikes. You can imagine what sort of impact this has on your productivity levels.

Exercise helps trigger the process that creates new brain cells and also makes those new brain cells more effective. So even though some of your brain cells may have crawled off into a corner to die, exercise can help you build more of them and improve your memory.

The birth of new brain cells is called neurogenesis and there’s even a specific region of the brain where actual new brain cells are created because of exercise. It’s called the hippocampus, it’s shaped like a seahorse, and it’s critical not just for memory but also mood and imagination.

If you’re wondering where I’m going with all of this, just ask yourself what drives you to be productive.

I rest my case.

(Just kidding, I’m going to list another five ways in which exercise maximizes your brain health and boosts your productivity. Keep reading).

2. It boosts your energy levels

A lack of energy is one of the biggest factors that stops people from working out. They’re either too tired to get up and go for a jog in the morning, or way too exhausted after work to even think about hitting the gym.

The ironic thing is that exercise actually boosts your energy levels. When your body becomes more active, internal mechanisms like metabolism and blood flow increase. So while it may seem logical to assume that exercise will make you even more tired than you already were, the opposite is true.

On a cellular level, tiny organs called mitochondria work like tiny power plants to generate energy so you can perform. The more exercise you do, the more energy they generate to meet your needs. They generate this energy from the controlled breakdown of food molecules – that’s why it’s essential to ensure you’re eating nutrient-dense foods if you’re doing regular exercise.

So when you find yourself falling asleep at your computer in the afternoon – definitely not a productive activity – fight off the fatigue and go for a brisk half-hour walk. Just 30 minutes of exercise can deliver a big boost in energy, plus you’ll gain a fresh perspective on your work.

No matter how tired you are, exercise is actually the very thing that will get your motor running again and therefore supercharge your productivity.

3. It makes you feel good

Forget about your fidget spinner. There are plenty of natural ways to maintain your calm, focus on the right things and avoid anxiety while being productive at the same time.

You probably already know that exercise releases endorphins which make you feel good and give you that smug fit person’s glow. Some say the effect of endorphins is so good it’s like a temporary high. But endorphins from exercise also have a huge impact on mental health issues including depression, anxiety and ADHD.

One research study found that depressed people who exercised regularly saw as much benefit as people who were treated with the antidepressant Zoloft. So instead of turning to a prescription, you can try half an hour at the gym instead, either to substitute or augment your medication.

Exercise also reduces common symptoms of work stress, including tense muscles, migraines, muscle cramps, insomnia, heartburn, and more. If you work in a stressful or highly demanding job, it might be having more of a mental or emotional toll on you than you actually realise, and ultimately be affecting your ability to get things done.

Regular exercise is one way to fight back against this predicament and to feel good about work when you need to the most.

There’s no denying that physical exercise can be incredibly gruelling. You have to push yourself through a pain barrier even when every inch of your body wants to stop – I know that when I signed up to my first marathon, the idea of running for 3-4 hours without stopping just seemed completely unnatural.

The thing is, though, whether you complete a long-distance event or a 40-min group class, you nearly always feel positive and proud of yourself. Sure, that’s partly thanks to all the juicy endorphins, but it’s also down to the sense of accomplishment; the fact that you knew you wanted to stop but persevered anyhow.

This sort of mindset is crucial to true productivity and measurable success in the business world. You’re going to experience tough times as well as good times. At some point or another, you are inevitably going to question why the heck it is you do what you do and what value it actually holds for you.

You will feel like giving up. You will definitely feel like being unproductive. But even at these times, you can remind yourself of the way you power on through when you exercise, and apply the same mental stamina to getting through your work situation.

Exercise isn’t always comfortable – but neither is life. Incorporating regular exercise into your routine can make you better at handling daily challenges. Endorphins can even help improve the prioritizing functions in your brain, allowing you to concentrate better on the challenge at hand and how to overcome it.

We’ve all heard it’s important to stay positive in times of adversity, but it’s equally important to show stamina. Exercise can help you build endurance and fortitude in spades.

5. It clears your head

Exercise gives you the opportunity to stop thinking so damn much. You can just hop onto a bike, plug in your headphones and zone out completely. The simple act of clearing your head can greatly enhance your health, creative energy and productivity.

A research study from Leeds Metropolitan University looked at office workers who headed to the gym once a day. It found that these people were better able to manage their time, felt more productive, and interacted better with their colleagues. When they went home at the end of the day, they felt more satisfied with their work experience as a whole.

On the flip-side, on days that these office workers didn’t manage to get to the gym, they didn’t report the same sorts of positive feelings. In fact, the majority felt that being physically sedentary made them mentally stagnant.

The truth is, the brain needs more downtime than it usually gets. Working in a constantly busy, stressful environment clutters the mind and confuses the senses. Even when you begin the day undaunted, dealing with a constant influx of emails, requests, demands and developments can really stuff up your sense of emotional equilibrium.

Dedicating time to exercise in which you don’t have to think and can simply ‘be’, even if it’s only for half an hour a day, can help combat this cerebral congestion. Other benefits include increased productivity, replenished attention and heightened creativity.

By taking a step back from work and going to the gym, you are taking the time to treat your brain to a breather. It works hard – you can’t expect it to constantly be productive if its working conditions resemble those of an unethical factory during the Industrial Revolution.

6. It keeps you focused

Productivity and the amount of hours spent working aren’t necessarily the same thing. You could spend five hours working on a project and get hardly anything done… then suddenly, in a burst of focus, finish off the whole thing in 30 minutes.

Exercise can help more closely correlate the two by keeping you alert and focused. Dr John Ratey, author of Spark: The Revolutionary New Science of Exercise and the Brain reckons that exercise can improve your brain in the short term by raising your focus for two to three hours afterwards. In the long term, it can help starve off brain ageing and Alzheimer’s.

As I mentioned earlier, endorphins can improve the prioritizing functions of the brain. It also transpires that after exercise, your ability to sort out your priorities improves, enabling you to block out distractions and better concentrate on what you’re doing.

Plus, another research study that looked at the effects of exercise on cognition revealed that exercise can greatly improve your affective experience and cognitive processing – regardless of age.

If you want to use exercise to stay alert and improve your verbal memory, focus on getting your heart pumping through cardiovascular activities instead of lifting weights. They help improve blood flow to the brain to keep you sharp and are also better at bolstering the idea-generating components of creative thought.

Exercise might not be the sole key to success, but it’s definitely a factor. Those people who jog every day at 4:30AM are probably onto something, and not just because they achieve that glorious runner’s high.

The physical process of exercise can drastically improve your brain function and boasts many other positive side effects. The best thing is that how you feel about the physical activity you undertake is what really matters, and what is most likely to boost your productivity. That’s right – a series of scientific studies have shown that when people perceive their chosen exercise to be something positive, they’re more likely to benefit from its productivity-boosting effects than people who view it as a chore.

So whether it’s a lunchtime walk, a thrice-weekly spin class or a furious rowing session, choose something you like and do it regularly. Just about everyone can benefit from exercise in one way or another so don’t be intimidated.

As a famous sportswear company succinctly put it, just do it.

Hilary Simmons is the Content Editor for Sidekick Digital (FlypChart's parent company). She also runs her own business as a writer, copywriter and editor. Her funniest job to date was writing daily horoscopes - and yep, she made them up completely. She can be found at hilarysimmons.com.

5 Factors Affecting Productivity For You And Your Content Marketing Team
November 10, 2017

The Art of Calendar Chunking and How it Can 10x Your Productivity
October 13, 2017

How To Say No To Someone That You Like Without Losing The Relationship [Video]
July 4, 2017

3 Productivity Tips For Getting More Things Done In Your Day [Video]
June 27, 2017